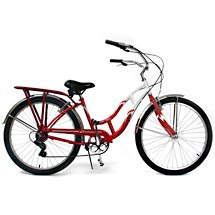 Yesterday, December 23rd, I found myself doing something I try never doing- going shopping. I thought I had all of my shopping done before December 15th, but my Grannie, who had been in Colorado visiting my Dad for three weeks, never got the chance to shop. She just had to get my mother and my cousin’s stepfathers’ wine purchase and she only trusted me to help her because, according to her, I have better taste in wine than anyone (ha, that was a good pun, right!). So, we made a lunch date, which ended up lasting three hours, to get wine at World Market. Most of that time was actually spent getting in and out of the parking lot- luckily Grannie had her handicap hanging tag, so we got a close spot. They really should just hand those out to
people once they are past, say, 75.
Once we shopped- I picked out one of my favorites for them, Llano Estecado Signature Red Meritage- I took her home. I remembered an hour later, though, that I really needed to go to Braum’s to get milk, eggs, and cheese (for the Christmas macaroni!). Did that, came home and began my baking- only to remember that I probably would prefer to go out to Wal-mart (ugh) and Home Depot to get gift cards on Eve Eve instead of Eve, which would be a nightmare! So, I stopped what I was doing, yet again, to head out. Fortunately, I had only gotten to cutting up the orange slices for the orange slice cookies, the cherries for the pumpkin bread, and the pecans for both.
I hopped in my car and headed for Wal-mart. I decided that, if the garden department was open, it would be best to park there, especially since that side of the building is also closest to the exit by the Home Depot. As I entered, I noticed why the garden entrance was open- they had about 60 bikes sitting out where the plants should be. As I wandered around the store looking for a last minute digital home thermometer for my mom (I put the original one I bought for her from Target in the greenhouse), I began thinking that maybe I should buy myself a bike. It would probably cost less to buy a new bike than to fix up my old one with the rotten tires and bad breaks. I found the thermometer as well as a new book light for myself and the dreaded gift card (I love you Aunt Beverly and Robert, but would you just start shopping at Target already!), and headed back out to the register in the garden department, which usually only has about two people in line. I got in the two person line and looked out the window at the bikes again while I waited. Really, those bikes would probably be cheaper than getting mine fixed. I thought I might just look at one on my way out…and I did.
As I went out the sliding doors, I spied what I thought might just be the most beautiful girls bike I had ever seen. It was a red Schwinn with a fat butt seat (not the real name for it, I’m sure). The man watching everything out side asked me if I thought my daughter would like the bike and that he would help me get it in my car if I decided I wanted to buy it for her. I laughed and told him I didn’t have a daughter but was looking at the bike for myself. He then suggested I do something that I never thought they’d say to an adult in a Wal-mart- he told me to hop on and give it a spin around the garden center. The weird part about it is that I actually did it! I hopped on and peddled around in several large circles around the garden area. I started giggling very loudly, which made several shoppers stop and stare at me as they left the store. I eventually got off of the bike, parking it where I got on. The very helpful man then asked if I was going to buy it. I paused briefly and then told him I’d think about it and come back later if I decided to. By the time I got out to my car, I had decided exactly what I was going to do- although the Schwinn cost $159, it would probably only cost around $65 to fix up my bike at home. So, I will probably just deal with what I already have for a while. But that Schwinn was beautiful!
Posted by Rachel Pilcher
Newer Post Older Post Home