There is a lot of catching up to do on this blog! First off, in an attempt to get healthier by exercising, I decided to finally get that bike I was lusting after at Christmas. Mom and I set out one weekend (before Mother's Day...) to find it. We knew we were going to probably search several stores to find the right one, but when we arrived at the first Wal-, Mom found that she really liked this one blue bike in particular. 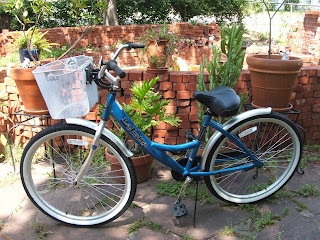 So she got it for Mother's Day (despite the fact I gave her a nice gift in New York!!!). I added the basket because, well, it just makes it look cuter! Hmm... this still left me bike less, though. We searched all weekend to find my pretty red Schwinn, but could not find it anywhere! Several of those Wal- stores had a place holder for it, but no actual bike. After Three days of searching Wal- stores, I finally gave up and ordered one online.

It arrived 4 days later. Turns out that the Wal- store do not put bikes together when they are ordered and shipped to the store, so my lovely, already-has-a-bike Mom, called up the store begging to have them put it together for me because she was afraid that I'd kill myself because I left a part or two off. Now I am the proud owner of.... 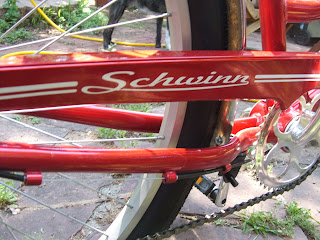 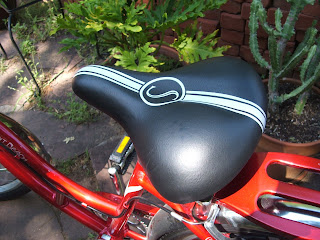 With a big butt seat (um...because I have a big butt?) 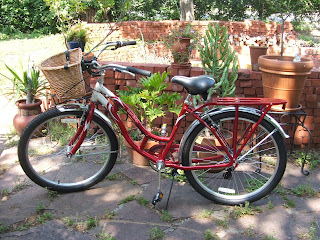 And this morning, I put the basket on it. The lovely Mom then said it looked just like Pee-Wee Herman's bike. Not sure, but I think that might have been a compliment. I think it looks like the Fat Tire bike, myself. Ok, now I want a beer!
On the gardening front this year, I decided to build raised beds in my driveway. At first I was going to use wood to border them, but then I remembered that Mom had some red scalloped border from her former flowerbeds she had in the front. I'm all about the recycling, so here we go...

First, I laid out the black tarp and then dug in the compost pile and was able to harvest a meager amount of dirt before giving up and buying soil. 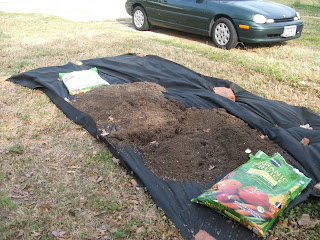 I did go for the organic Miracle Grow stuff, though, so it wasn't like I went all chemically on the garden (but that stuff sure does smell non-organic...I may need to research their claims a bit closer later!). 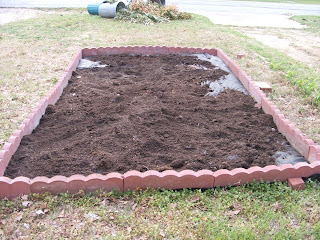 I realized I was going to need so much more soil than I thought. Since my seedlings pretty much all got steamed while I was off in NYC, I sewed the tomato seeds directly into the ground. 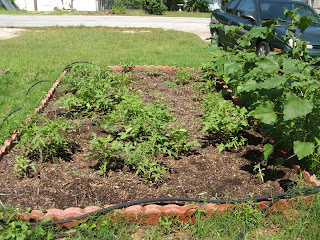 They came up! I transplanted some of them this morning to make them less concentrated and filling in the blank spots, so hopefully those will survive. The sunflower from last year spread its seed on its own and have created a border on the north end of the bed. I hope they don't shade the garden too much, or I'll have to chop them down. 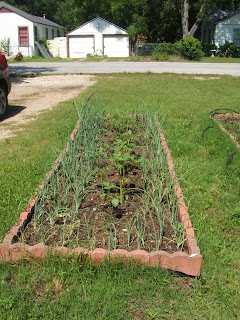 I didn't have enough room for all of the tomatoes to go into the tomato bed, so the tomatillos and Red Pear ended up the centerpieces of the onion bed. I picked one white onion today, but it seems to be in the green onion stage right now. I'll keep checking on them.
So much has kept me busy and tired this spring that I am sad to say that this is as far as I've gotten in the garden this year. Hopefully some of my seeds that I haven't planted yet will become late summer, early fall veggies. I do have some work cut out for me on that, though.

This evening I hope to feel well enough to mow and build my tomato cages. If I do, I will certainly come back tomorrow and post pictures!