The rain has been wonderful for the garden, but terrible for going out picking! Over the past two days, I've picked an overflowing basket of tomatoes. 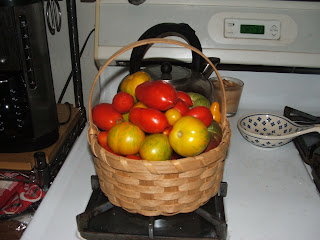 Thursday night I watched a preview viewing of Julie and Julia, which is based on the book of the same name by blogger Julie Powell, who spent an entire year cooking though Julia Child's Mastering the Art of French Cooking and blogging about it. The film alternated between Julie's (played by Amy Adams) life and that of Julia Child's (Merle Streep, because, ya know, who else could pull that one off!) life in France. It was a truely hilarious and touching film. Nora Ephron did a fabulous job at the screenplay and directing. Since then, I have been putting way too much butter in the pan to cook the eggs. You know what? They've been the best and most beautiful omletes I've ever made in my life! Vive le beurre!!!
Posted by Rachel Pilcher
Newer Post Older Post Home