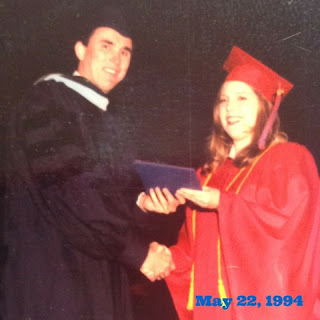 Today is Senior Day at my high school. Currently I have four alumni hanging out in the library, waiting for their Senior friends to join them for lunch and the afternoon festivities.  I see this every year, and it doesn't matter which school I work. The alumni come back.

I didn't do that. What I mean is, once I graduated, I didn’t spend time reminiscing about the “good ol’ days.” For me, at least, those days were over, in the rear view mirror, and there was no turning back. It's not that I didn't enjoy high school, or that I wasn't well-liked (I was a cheerleader and in band, so I covered the bases right there!). I was just too busy doing the college, work, life thing to worry about going back. I did, eventually, return, but it was kind of weird for me. The first time was just after my first year of college. I only visited two teachers and it was after school. We spoke of how I was doing  and I thanked them for the work they did in preparing me for college. I didn't feel the need to return after that. I said what I'd come to say.

Later on I returned professionally to do some of my pre-certification teacher observation hours. It took me an entire class period in one of the classrooms to realize that this was the very same room I spent four years taking Latin and English. It was so clean. So bright. The former inhabitant of that space, back in my day, had been in the room for at least 30 years! Gone were the books and years worth of memorabilia. Then there was the room across the hall, which belonged to my beloved history teacher. He passed away rather suddenly a few years after I graduated. Instead of his classroom being taken over by another teacher, it looked as if it had been made into an office or workroom. This was just too much for me.

My last return was for my 10 year reunion. It was not really that fun. I skipped my 20th. Facebook replaced my need to see many of the people I went to school with. Now, I'm venturing into new territory. I've accepted an invite to a multi-class reunion of sorts. A dinner at a restaurant in a different city than I even graduated from. I’m torn about attending, but if all else fails, I can make my excuses and leave after a few hours.

I don't like walking down memory lane, which is probably why I am hesitant to even go to this reunion. I don't feel I have much in common with many of those I went to school with. My number one piece of advice that I give all Seniors: Don’t come back unless you have to. It's never the same. Thomas Wolfe was right- You can't go home again.