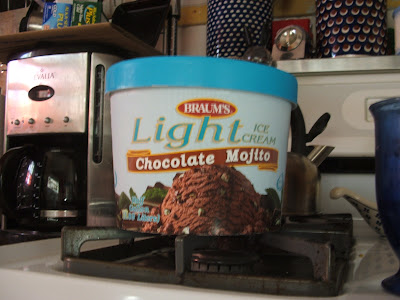 Okay, so I was in Braum's yesterday to get some cheese and I was drawn to the Light Ice Cream section. I've seen this in the cooler the last few times I was there, so I finally had to satisfy my curiosity.

I had a hard time getting past the name though. Mojito and ice cream do not scream combination of success. Especially with chocolate. I started thinking of the ingredients in a mojito and it confused me even more. I get the mint, I get the rum flavoring. Those work with chocolate. It is the lime that was throwing me off. Lime and chocolate? I don't think so... but that obviously didn't stop me since it is sitting on my stove in the picture.

I took some time with this one. I didn't immediately dig into the tub. I'm not the crazy ice cream eater most people are, but I do go for the strange flavors. Once I scooped some up though, I noticed the chocolate sauce swirl mixed in. It turned out to be where the rum flavoring was added. The chunks of mint were nice. From what I could tell, there was no lime flavor anywhere to be had in this ice cream. The mint was overpowering, though. It was like having a frozen creme de mente grasshopper.

It was "okay" but probably nothing I would ever buy again. It was, basically, After Dinner Mint on steroids. Not really a "mojito." So, my conclusion is that there is a definite unfortunate name game going on at the Braum's plant in Oklahoma.
Posted by Rachel Pilcher
Newer Post Older Post Home