The Past Few Days... 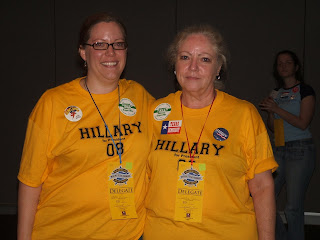 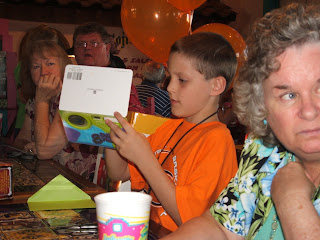 Left- Elizabeth in her lovely dress at the annual Bungalow Party
Below- More Tomatoes! 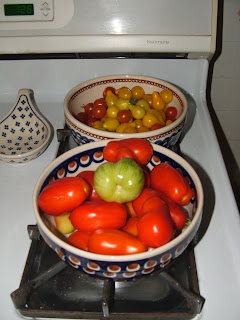 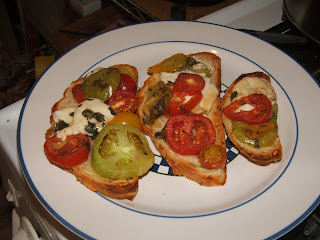 Left- My most wonderful dinner tonight

OK, so these pictures turned out...a little strange this time, but I will work with it!

This month has been a little crazy for me. June 5-7th saw Mom and I travel down to Austin to the Democratic State Convention. It was a little strange, since everyone knew that Hillary Clinton was going to drop out, but it was an experience of a lifetime. Who would have thought we had over 12,000 Democrats in the state willing to go to a convention, let alone all of those who sent us there. I was a delegate, Mom was an alternate, but she quickly was elevated to delegate status. I just hope that the energy continues.

On the 7th I had not one, but two parties to go to, so we ended up leaving the convention early. I hope we don't get in trouble for that, but what can I say. I was there for the most stressful part- Being a Hillary Delegate (in a shirt!!!) in a sea of Obama supporters. The first party was for my little cousin Chase. We missed his brother's birthday in March (I was just studying too hard), so Mom and I will be taking them both out to eat at this place called Incredible Pizza. Whee!

The second party was at my friend Elizabeth's house. We had... adult beverages, relaxed and talked quite a bit. By the end, it was just Elizabeth, Heather, and myself out on the patio, just like old times. I actually got home by 2am! Who would have thought...

Monday, June 9th was my last day as a "teacher." It was also my last day at the high school I started teaching at six years ago. I don't think it has quite hit me yet that I will not be going to work over at the high school by the hospital in August, but I know it will soon. I have to go pick up my keys to my library this next week. That will make it truly official. I'll miss my people, but I know I have a new adventure ahead of me. Besides, we have email!

The harvest has been nice to me so far. The picture of the two bowls is actually out of date. By Friday of last week, I had three: one of Romas, one of Yellow Pear and Grape, and a full bowl of Green Zebra. I have been giving tomatoes away to anyone who will take them (really, just to my Grannie and Heather). Elizabeth had Heather and me over for dinner on Sunday, so I took a tomato, basil, and mozzarella salad (she made the most amazing mussels, YUM!). The leftovers were my dinner tonight, placed on slices of toasted Parmesan bread from Central Market and broiled for 8 minutes in the toaster oven. Double YUM!

Ha, I almost forgot... graduate school started back up on June 2nd. I got a bit behind with all of the excitement, but I think I am finally caught up...maybe....if that is possible.
Posted by Rachel Pilcher
Newer Post Older Post Home