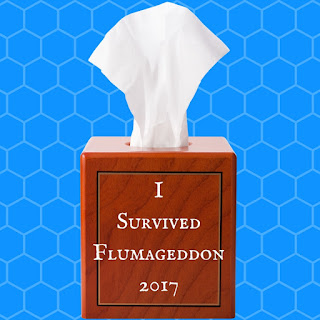 The past two weeks have been a bit of a drag. I had fully intended to begin blogging both on the Fort Worth Writer’s Boot Camp page as well as this one. Flu A said there was no way that was going to happen. I didn’t know I had the flu for a good three days, and by then it was too late to do much about it except take Theraflu and sleep. Which is what I did. Thirty hours’ worth in three days.

I’m still suffering from some congestion, but the temperature broke last Friday. I’ve had severe lack of energy since then. It’s been difficult to motivate myself to do my regular day to day work at school, let alone anything extra.

I refuse to make myself feel guilty for not having accomplished my goals for the past two weeks. I was sick. It happens to everyone. I can’t stress about this. I just have to do what I can do when I can do it. The best thing for me to have done for my creative process was to do exactly what I did: rest. If I had attempted to write during that time, it is entirely possible I would have screwed up, creating a more embarrassing mess than just not doing anything. This is an important lesson for me. I used to push through sickness, working myself to an even worse state than I would have been had I rested. I would end up being sick for a month or longer, never allowing my body to slow down to heal itself.

Please remember to take care of yourselves when you get sick. It may seem like the noble thing to do to just force yourself through it, but it is damaging, not only for your health, but also for your work. Plus, you don’t want to be “the one” to spread a contagious virus!

Stay well, and when you aren’t, allow yourself to stop.
Posted by Rachel Pilcher
Newer Post Older Post Home